Why won’t my stove light? 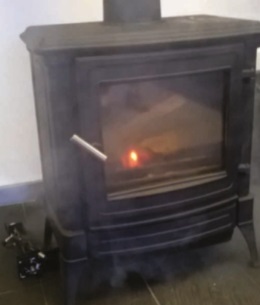 Seasonal temperatures can have a significant effect on the operation of a stove and flue system.

Stoves use the effect of air current within the flue to both expel the products of combustion and to induce air into the stove. Normally, because the air within your house is warmer than the outside air the flue is expelling air from the stove even when it’s not operating.

During the changeable weather conditions of Spring and Autumn, the outside temperature can rise suddenly and become warmer than the temperature within the house.

This then causes the air within the flue to reverse its normal flow pattern and air travels down the flue. The most obvious sign of this will initially be a smell from the flue and while this is not harmful it may be unpleasant if the flue has not been swept as often as it should have been.

If sufficient air is coming down the flue the stove will appear to begin its lighting cycle but smoke will emanate from what are normally air inlets and into the room.

The stove may continue to operate in this way for a considerable time but because the flue is operating in reverse there is no possibility of any hot air produced by the stove travelling up the flue, to warm it, and reverse the flow.

Therefore, if the house feels colder than the outside temperature do not light the stove without clarifying that the air is travelling up, rather than down, the flue.

As mentioned previously, a smell of soot is an indication that the flue is operating in the reverse but by opening the stove’s door and placing a hand within the stove, it should be possible to confirm the air flow.

Leaving the stove door open for a few minutes may allow enough air through the flue to warm it sufficiently to at least stall the air flow, which will then make lighting possible.

HOW TO GET AROUND THE PROBLEM?

We would recommend setting the stove controls to the lighting position, putting two loosely crumpled pieces of newspaper onto the grate and lighting them. Leave the main door a crack open, the thickness of your little finger, and let the paper burn out. This produces very little smoke but enough heat to reverse the direction of the flue.